dollars in cash, and testimonies that the deceased had claimed to be an ET-human hybrid working with U.S. intelligence agencies, among other odd plot twists. The post went on to become my most viewed by far, and continues to consistently be among the most viewed per week in spite of having been posted two years ago. 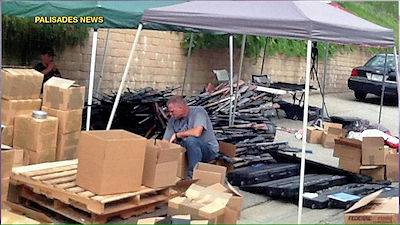 My initial FOIA request to the FBI for records on the Lash case was filed in 2016. I was subsequently informed by the Bureau in a letter dated Dec. 15, 2016, that records were unable to be identified, but it was added that the “response neither confirms nor denies the existence of your subject’s name on any watch lists.” It was also clarified to be a standard notification “and should not be taken as an indication that excluded records do, or do not, exist.”

The letter further stated, “If you have additional information pertaining to the subject that you believe was of investigative interest to the Bureau, please provide us the details and we will conduct an additional search.”

I therefore point out ‘The Guardian’, in an article dated July 23, 2015, reported the late Mr. Lash believed he “was a secret government operative under constant surveillance by the CIA, the FBI or both.” The article may be viewed here.

Similarly, ‘The Washington Times’ reported Lash identified himself to neighbors as “Bob Smith” and “claimed to have worked for either the FBI or CIA.” The July 23, 2015, article may be viewed here.

‘The Los Angeles Times’ and many other media outlets reported similar circumstances. Files available for release are therefore requested on any investigations the Bureau may have conducted of Jeffrey Alan Lash, as well as any interest in or relationships with Lash.

Let’s hope a further search for responsive records at the FBI turns up something interesting and available for release. For those of you following the political sword rattling taking place between the White House and FBI, it might be worth noting that the letter received in the May 10 email was actually contained in a pdf, and was dated March 23. For whatever reasons, the March letter was not emailed until the day after former Director James Comey was fired. I mention this because it might or might not indicate ripples of the political turbulence reach throughout the FOIA staff and process in some manner.