Out-of-Place Artifacts or “OOPs” have been found all over America. These range from dozens of Roman coins, Chinese anchors, tablets inscribed with Hebrew, cuneiform tablets, strange stone inscriptions, and countless other bizarre artifacts that go well beyond what’s considered “normal.” They are invariably described by skeptics as hoaxes, artifacts dropped or lost by settlers, or simply misunderstood. But the Mayan figurine from Arkansas is one of the strangest OOPs I have ever seen. It is prominently displayed by the inside entrance to the Fort Smith, Arkansas Museum of History.

The Museum is a wonderful warehouse displaying all of the deep history of the Fort Smith area including the Native Americans, early settling of the area, the famous “Hanging Judge” who presided over the area, early military history through the world wars, and on to the modern eras. But the real oddity of the museum to those interested in early history is the Mayan Figurine displayed in a clear case at the entrance. 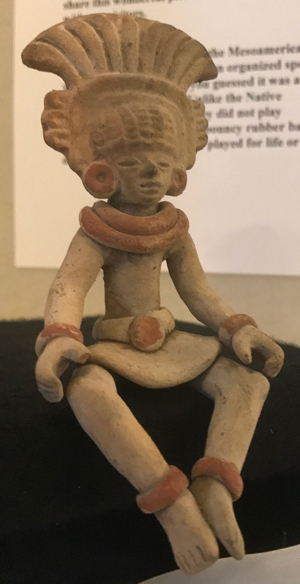 The artifact is about 4-inches in height and depicts a seated Mayan in headgear. It was discovered in a cave in west-central Arkansas in the late 1970s. The artifact was initially sent to the Anthropology Department at UCLA. There, it was authenticated as a genuine Mayan artifact that was made in the eastern Mayan area of the Yucatan. The artifact was dated to the Late Classic Period, circa A.D. 600-800. The object is thought to have once been attached to a larger bowl.

How did it get to Arkansas? The conventional explanation that is cited is that the artifact was carried to Arkansas by “Spanish explorers” who ventured into Arkansas—perhaps by the troops accompanying Hernando DeSoto who ventured into Arkansas in 1541 where he remained near Hot Springs for the winter. It is explained that the Spanish hid various items they had looted over the years to lighten their load. Caves were a favored hiding place for the Spanish who apparently hoped that they could reacquire the hidden artifacts and heavy goods they looted on a return visit. However, by the time DeSoto’s troops reached Arkansas they had already become a haggard group who had already lost almost everything they looted and most of their gear. DeSoto himself never was in the Yucatan or in Central America, but it is more than likely that some of the 620 conquistadores accompanying him had served in Central America. Thus, it’s possible that one of these conquistadores carried the Mayan figurine along with him, but the odds of him making the long and arduous journey to Arkansas with the Mayan artifact intact is slim. The object is clearly an oddity but the truth about how it reached Arkansas will never be known.