Will Gibb says he didn’t realize it was a cougar that had caught his beloved pet husky by the neck until after he pummelled the wild animal in the head.

“I wasn’t really analyzing it too much at the time,” Gibb said. “All that was going through my mind is that I had to protect my dog.

“It was just very instinctual. My dogs are like my children.”

The Red Deer man was meeting a friend for coffee at the Whitecourt Tim Hortons on Dec. 26, when he let his two dogs Sasha and Mongo out into the parking lot for a short run.

Interview: Progress report on man and dog attacked by cougar4:01

Within seconds, he said he heard Sasha, the female of the pair, start yelping.

A cougar had emerged from the woods nearby and pounced, he said.

“She (Sasha) was crying out in pain and distress so I went running,” said Gibb, a 31-year-old technician. “And I saw something wrapped around her so I ran up and punched it in the side of the head.

“At that point I realized it was a cougar.”

Gibb said he charged into the woods after the cougar but turned around to tend to his injured dog, which was whimpering and bleeding on the pavement.

‘It was pawing at me and I was throwing punches’

“I was swinging but I looked back and I saw that Sasha was on the ground kind of twitching,” Gibb recalled. “So I went back and tried to scoop her up with my left arm.”

But the dog, alarmed from the attack, latched onto Gibb’s hand and started biting, just as the cougar re-emerged from the woods and charged a second time.

In all the excitement, Sasha bit his left hand, something Gibb suggests was because the dog may have been “thinking I was the cougar.”

He added: “She was fighting for her life, and I was trying to keep the cougar at bay with my right, and it was pawing at me and I was throwing punches at it.” 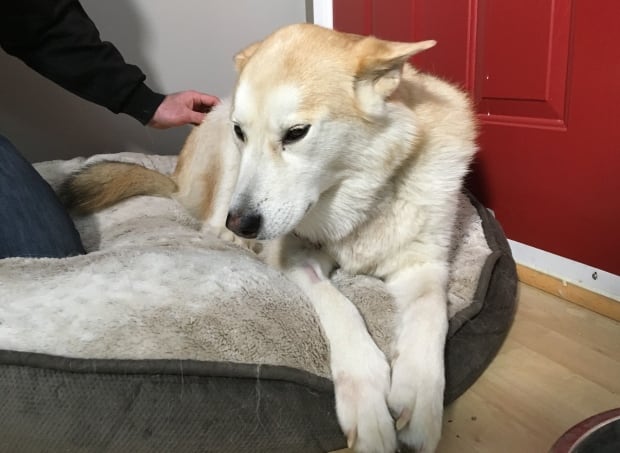 Sasha sustained bite wounds to her neck and belly and under her legs. She was released from the veterinary clinic on Wednesday. (Travis McEwan/CBC )

While the dog unlatched her teeth from his hand and ran off, the cougar was not deterred by Gibb’s punches. As Sasha ran across the parking lot, the cougar fixed its eyes on Mongo, who was sniffing around at the edge of the nearby trees.

“I could see the cougar going for him, so I got between him and the cougar and started swinging and screaming at it, and called for my brother and friend to come give a hand,” Gibb said. “And then I reached down for the closest, biggest stick that I could find and I ran back into the trees to go fight the cougar.”

Within minutes, both dogs were back in the safety of Gibb’s truck, and the cat disappeared into the bush.

“I was surprised to hear that the owner took the quick action and it’s probably what saved the dog’s life in this case,” said Sgt. Jack Poitras, who said the cougar was located in the woods nearby and killed.

“I wouldn’t recommend everybody wrassle with a cougar, but in this case it worked for the best.”

‘She had bite wounds around her neck’

The dog was taken immediately to the Hilltop Veterinary Clinic, which is about a block from the attack.

Veterinary staff said Wednesday the dog has been released from care.

“She had bite wounds around her neck and claw tears on her belly, under her armpits,” said Jordan Bremmekamp, the veterinarian who treated the husky. “I had to sew up some of her wounds. They tore into her muscle. It’s a pretty painful situation she’s in, but she’s doing fine.”

The man was left with deep claw marks on his arms.

“The wildlife does come into town once in a while,” Poitras said. “Dogs are easy prey.”

Poitras had this advice for mountain wilderness-area visitors, particularly when accompanied by pets: “If you’re out in the wilderness near the mountains, be aware that cougars and other predators are out there. Just be mindful of that, when you’re out and about with your pets.” 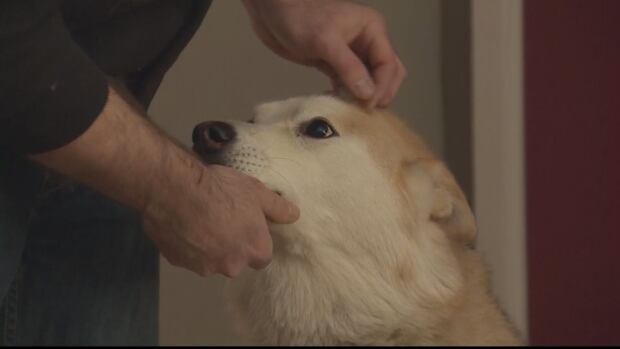 ‘My dogs are like my children,’ Will Gibb says. (Travis McEwan/CBC )