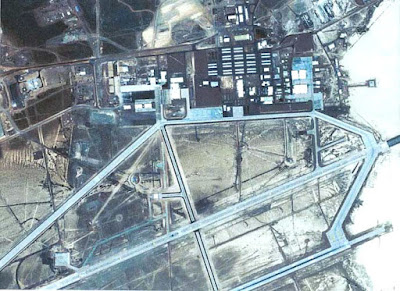 people try to associate Area 51 with Roswell, thinking it’s in New Mexico, when in fact it’s located some 800 miles from Roswell in Nevada.

Since then I have discovered a web site www.dreamlandresort.com that probably is one of the best sources on the internet to obtain new information about the base.

While in Rachel I had the opportunity to visit with Chuck Clark, who at the time was one of a few authorities that had obtained a lot of information about the secretive location about 85 miles north of Las Vegas Nevada. I went out to the gate by myself, traveling down a 13.8 mile long gravel road to the entrance where I was met by “cammo dudes” sitting in their pickup trucks on the hill behind the entrance, watching me with a pair of binoculars. This is the gate or entrance to the base that is the most well known and shown in TV documentaries. They know your coming down that road long before you get there.

The next day Chuck took me out to another gate I wasn’t aware of, located not far from the town of Rachel. Unlike the first gate I visited, this one had the guard shack right by the entrance. At the other location your on the property before you get to the guard shack behind some sand dunes. It wasn’t a good idea to cross the property line since the signs at both gates back thenwarned “the use of deadly force is authorized.” Curiosity seekers are not welcome.

The base was operated by the CIA when it was opened, and originally opened in 1955 to test the U2 spy plane. The Department of Energy was involved with the base, and today it’s controlled by the U.S. Air Force. Years later, in the 1980’s, we found out about the base through a Russian satellite photograph. So it existed without anyone knowing about it for some 30 years, proving the government can keep secrets for a long time as they did with the atomic bomb, new military aircraft, and still do with the 1947 Roswell Incident.

The warning signs and presence of the security guards keeping an eye on you as you get to the gates only adds to our curiosity of what really goes on behind those gates. Very few know what transpires there above and below ground after all these years of the base being located there.

Several things related to the base still exist as they did when I was there, while other things have changed in the past 11 years. Many employees are still shuttled to the base on a fleet of six, Boeing 737 “Janet flight” airplanes from the McCarran airport in Las Vegas where they have their own terminal (only a few blocks from the Las Vegas strip), also under high security. The airplanes are unmarked, painted white with a red stripe down the side, and no identification other than the aircraft number at the back of the planes. They make daily flights to and from the base, in addition to taking employees to other locations with other secretive projects such as Lockheed and Northrop. Between November 2008 and June 2009, all six 737-200 Janet Flight airplanes were replaced with 737-600’s purchased from Air China. The old planes are in the military bone yard in Tucson, Arizona.

Another means of transporting local employees to and from the base is still the use of white buses. Again, the buses have no identification on them other than a government license plate. White appears to be the preferred color of transporting vehicles. Employees living in the general area are picked up and returned in these buses. As a side note, the license plates are government issued, and the first two numbers on the plate are the year of the vehicle. As an example, a truck, jeep or bus having the numbers 98 as the first two numbers on the license plate would indicate when the vehicle was put in service. 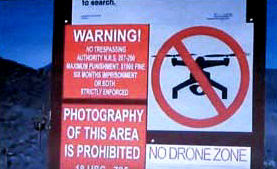 Warning signs at the entrances have been replaced and changed. The signs no longer say, “The use of deadly force is authorized.” The new signs make it illegal to fly drones in the area. Also, the gate area now has concrete barriers and razor wire. Some of the guard shacks have been improved or replaced at the gates since I was there, so I assume with building improvements, more cameras, sensors, etc., the security at the gates is more stringent then it was in 2006.

Several new large hangers have been constructed, one of which according to satellite images appears to be 215’ x 215’, and about 85’ high. One has to wonder what a hangar of such size would be needed for.

Over the years we have heard rumors that the base has been moved or shut down. Obviously with all the improvements that have taken place in recent years, that cannot be true. The base is very active and probably more active than in the past.

As a researcher, I would like to know what goes on inside the base, including the suspected or reported 22 levels below ground, and in some of those gigantic hangars. Also, what is the purpose of the runways that are some of the longest in the world? Knowing that all of the military aircraft we have had over the years have been test flown there, such as the U-2, SR-71 Blackbird, F-22 Raptor, F-117, B-1 and B-2 bombers, etc., I believe it is a vitally needed facility and still highly secretive, as it should be.

Rumors about aliens and alien craft being there is always mentioned when referring to the base, however, proving this has really never been verified. Possible– I suppose, when one thinks about all the other things that might be taking place there. So Area 51 continues to mystify us with only bits and pieces of information being released.