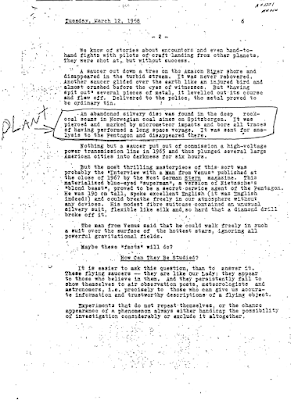 from the island. As late as 1985 researchers were still trying to substantiate the story, which had grown to include comparisons to flying disks allegedly seen by military personnel around the Arctic. The origin of the alleged Spitsbergen saucer was suggested to be both Russian and outer space at different times, and the case was called both a hoax and a matter of utmost importance, depending on the agency and era.

The part of the story Nick found most intriguing involves a file at the NSA. It’s titled, Department of State AIRGRAM – Subject: Flying Saucers Are a Myth.

The file contains a 1968 airgram message from the American embassy in Moscow to the U.S. Department of State. The purpose of the message is to provide the State Department with an English version of a then-recently published article debunking UFOs and authored by Villen Lyustiberg, Science Editor of the Novosti Press Agency.

Lyustiberg’s piece contains a paragraph addressing the Spitsbergen case. The paragraph has been circled and identified as a “plant,” presumably by someone employed at an American intelligence agency at some point in time.

Author David Clarke addressed the alleged Spitsbergen saucer in his nonfiction
book, How UFOs Conquered the World: The History of a Modern Myth. He described the above document as shared with him by Nick Redfern, and went on to explain the work of Bill Spaulding of the U.S. group Ground Saucer Watch.

Following intensive FOIA work, Spaulding apparently came to believe that crashed saucer lore was actually promoted and in some cases deliberately fabricated by the U.S. government. Clarke reported that Spaulding found no evidence the CIA had any knowledge of such crashed saucers, but the Agency indeed considered advantageous uses of spreading belief in UFOs for psychological warfare purposes. As Clarke wrote, “One [CIA] memo put it this way: ‘A fair proportion of our population is mentally conditioned to the acceptance of the incredible. In this fact lies the potential for touching-off of mass hysteria and panic.'”

In 1990 Clarke obtained comment from Spaulding on such documents, to which Spaulding explained in part, “There are some good official UFO documents. But they do not show the existence of saucers as spaceships. Rather, they show a deliberate trail of misinformation about saucers, a ruse to cover-up high tech testing.”

We might give such circumstances deeper consideration when contemplating stories of alleged downed alien spacecraft. We might also consider the perspective promoted by Science Editor Lyustiberg, some 50 years ago, was to discourage belief in flying saucers among the Russian public. It does not go unnoticed by this writer that the author of the above referenced airgram pointed out to the State Department that Lyustiberg’s position was in contradiction to other Russian publications; the embassy employee briefly summarized Russian stances on UFOs for the recipient at State before attaching Lyustiberg’s article.

It should be a forgone conclusion at this point that the UFO topic was exploited by the global intelligence community for a variety of purposes from one operation and era to the next. The consequences might indeed be significant and far-reaching.