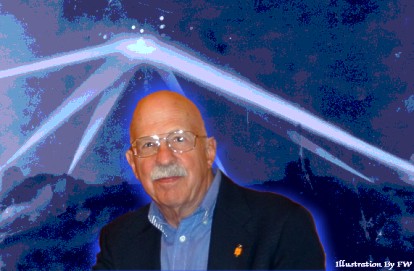 Editor’s Note: On this day we pay tribute to my good friend, colleague, research partner and eyewitness to one of the most significant UFO events in history.

Here is an excerpt of an article by a former student of Scotty’s, Caitlin Hammer. The UFO Chronicles published her piece back in 2006–FW:

this time, so it couldn’t be a drill. But neither could he confirm his fears of a real enemy attack –nobody answered the phone at the Civil Defense Headquarters. Only after he walked into the street for a better view did the air raid siren start up.

Mrs. Littleton’s father was staying with the family, and he was slow to get out of bed. Slow to do everything actually. But when Scotty’s dad shouted from the doorway, “Mr. Hotchkiss, I think this may be the real thing,” the old widower bolted down the basement steps.

Scotty and his mom were too curious to remain underground. Besides, the old man’s morning breath is deadlier than falling shells, they thought, and ran back up the stairs to the beach at their back door. The two of them stood side by side, clinging together for warmth, their eyes on the sky. Searchlights focused on what appeared to Scotty’s mother as a silvery, lozenge-shaped bug, seemingly paralyzed by the lights, hanging directly over Hermosa Beach.

Glowing shrapnel fell on the beach in front of them, sending the pair back under the eaves for protection. Scotty was so close he could smell the acrid smoke as the shells exploded. His eyes refused to blink and his lower lip dangled. Were the neighbor kids seeing this?

Not far from Strand Street, another air raid warden left his family in the backyard staring skyward. The thing they watched so raptly reminded him of the Graf Zeppelin he’d seen land at Los Angeles’ Mines Field in ‘29, only wider and flatter. He and some neighbors jumped into their cars, tossing a couple of shotguns into the backseat. The object picked up speed and vaulted into the night sky as they followed it, racing down Sepulveda. As it moved away, the warden got one last look at the rectangular silhouette. Three narrow slits, like the gills of a shark, stood out, glow an angry orange-red. And then it was out of range . . ..”