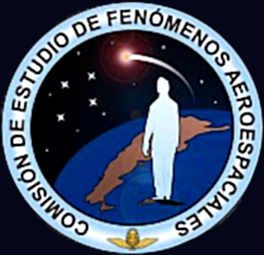 reported, according to a commission of the Argentinean Air Force (FAA).

The Comisión de Estudio de Fenómenos Aeroespaciales (CEFAE) is an agency attached to the Argentinean Air Force. It has operated since 2011 in an office shared by monitors that follow satellites in real time, along with the debris of the Soviet space station Salyut 7, which crashed in the Province of Entre Rios in February 1991.

Ruben Lianza, who is in charge of CEFAE, explained that they provide “an open public service that enables citizens to clarify UFO sightings they may have recorded. “We employ all the tools at our disposal to identify each case as precisely as possible. It isn’t that we’re looking for alien life in the photographs.”

With 40 years’ experience in his favor, the specialist explained that “many people manage to take photos when they see something in the heavens that they can’t explain, and others notice objects they did not expect to see, seemingly in flight, in photos they’ve taken. In such cases, many get in touch with us in the hope that we will identify these flying objects.”

“There are thousands of other objects having a commonplace origin that cause people to become confused. For that reason, this commission employs the term ‘aerospace phenomena’ rather than the ill-used acronym UFO.”

Lianza pointed out that “at least seven different kinds of explanations can be identified. Some are of an optical nature, being external or internal lens flares, particles or drops on the lens or sensor errors. Others are biological, birds or insects flying across the camera or creating optical illusions by having been taken at very low shutter speeds. There are also astronomical causes, such as the moon in broad daylight, for instance, or a star, planet or even the occasional shooting star, the sun reflecting off communication satellite mirrors, aircraft flying during daytime or nighttime hours or experimental balloons,” he added.

The commission makes use of three satellite and astronomical tracking software programs – Orbitron, Satflare and Stellarium – in analyzing cases. These record the exact orbit in real time with the possibility of delayed mode simulation for satellites and heavenly bodies. This allows reproduction of the conditions existing in the skies at the exact time and date at which the phenomenon was reported.

“When people see things at the edge of their visual field, the brain completes the missing information by resorting to the imagination. This can happen to a person with no aeronautical experience as well as to the most experienced pilot. It is for this reason that all the cases we receive must be accompanied perforce by photo, video or material evidence.”