The object appears to expand and contract as it hovers above Bracknell in Berkshire – not the first time the small town has seen unexplainable phenomena.

Father-of-one Bob Wise, 49, could not believe his eyes when he filmed the UFO last week.

Wise, a carer who claims to have seen around 15 UFOs, said: “It was really bright and moving slowly.” 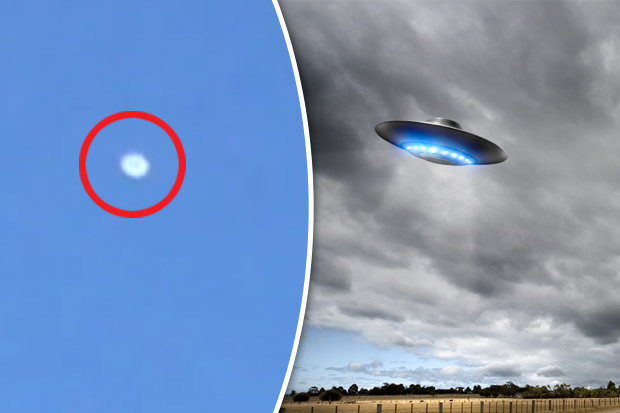 WEIRD: A glowing light appeared in the sky above Bracknell in Berkshire

“People laugh at me but things are happening up there”

“The way it glowed reminded me of burning magnesium.”

He isn’t sure what the object was – though he theorised it may be extraterrestrial or a Government experiment.

Wise added: “I’m open to the possibility that there might be a secret military base nearby.

Shutterstock / Leo Blanchette
More than 40,000 Americans have taken out insurance against being abducted by aliens.

“The military could be 60 or 70 years ahead in terms of technology,” he continued.

“I’m always on the look out because it so fascinating.

“Every time I walk to the shop I stare up at the sky – people laugh at me but things are happening up there.”

Bracknell has seen a number of high profile UFO sightings over the years.

In 2013, a pilot was flying 34,000ft over the town when he saw a “bright silver, rugby-ball shaped” craft hurtling towards him.

Photos were taken from the ground of mystery objects after the incident.

This comes as it was claimed aliens were responsible for Ancient Egypt.