Devin Scullion, a Hamilton man with a rare genetic disorder that causes rapid aging, has died at age 20.

“Forever in my heart. Tomorrow will not be the same without you, thank you for allowing me to be your mother,” Madley wrote. “I love you so much RIP my beautiful baby boy xoxo ❤ Lord please give me the strength to get thru this.”

Madley told CBC news that Devin woke up early Sunday with his heart pounding. Paramedics rushed him to the hospital, but he didn’t make it.

His mother was there for him the whole time, holding her son and comforting him.

Amazingly, Scullion died 20 years to the day that he was first officially diagnosed with progeria.

“He lived his life to the fullest and he loved every minute,” she said.

In many ways, Scullion had beaten insurmountable odds each year he made it past his 13th birthday. 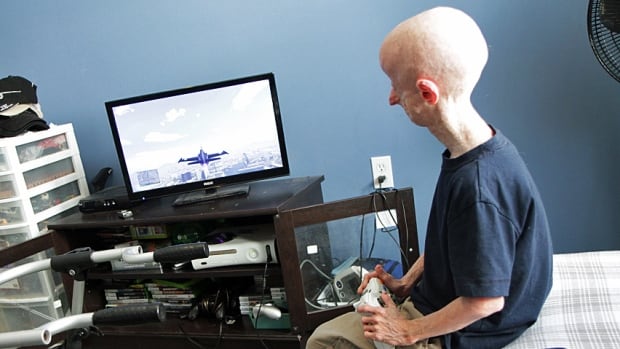 There were few things Scullion liked more than playing video games. ‘I’m just an average teenager,’ he said in an interview just after his 18th birthday. ‘I like to play games. That’s me.’ (Adam Carter/CBC)

Only about 200 children in the world have the disorder, called progeria (also known as Hutchinson-Gilford progeria syndrome, or HGPS).

Most individuals with progeria don’t live past their early teens, but Scullion maintained an incredibly upbeat outlook. He was an aviation buff and a massive fan of the CFL’s Hamilton Tiger-Cats.

We are devastated to hear about the passing of one of the bravest members in the TigerTown community. RIP Devin. pic.twitter.com/zrnQW2mggA

Ticats quarterback Zach Collaros tweeted about Scullion on Sunday night, saying, “RIP Devin. Your courage was truly inspirational to us all in TigerTown.”

Former Ticat Erik Harris wrote, “Smiled through the pain and inspired many! You’ll be missed Bud. Watch over us.”

Even NSYNC’s Joey Fatone tweeted about Scullion’s passing. Fatone met Devin when the Hamilton boy was just four years old and appeared on Maury, hoping to meet the singing group as a Christmas wish.

not sure many of u remember this : https://t.co/xM5vPwSFDn sad to say Devin has passed away. We will miss him RIP

In recent years, Scullion had dodged a massive heart attack, as well as two strokes just days apart. Yet he still did many of the things he set his mind to, from graduating high school to taking flying lessons, with his sights set on a pilot’s licence.

In a previous interview, Madley told CBC News she first noticed a difference in her son in August 1996, when he was born two months prematurely and weighed more than four pounds. He also looked different from other babies in the nursery. 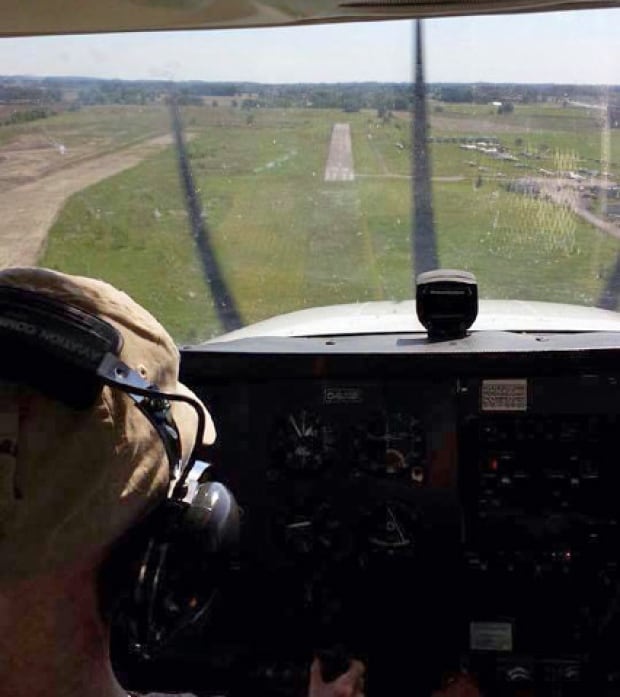 Scullion can be seen here flying a plane, which was a longtime dream of his. (Devin Scullion/Facebook)

In some respects, he advanced quickly. He gained weight like an ordinary baby. When he was four months old, he could hold on to her fingers and walk. Not long after, he was diagnosed with progeria.

During an interview shortly after his 18th birthday, Scullion told CBC News that even in the face of insurmountable odds, he chose not to focus on his own mortality.

“I just don’t think about all of that,” he said.

A GoFundMe page has been created to raise money for Scullion’s family, as well as funds for progeria research.

We last spoke to Devin on his 18th birthday. Watch what he had to say about surpassing everyone’s expectations:

A special day for Devin Scullion 3:14