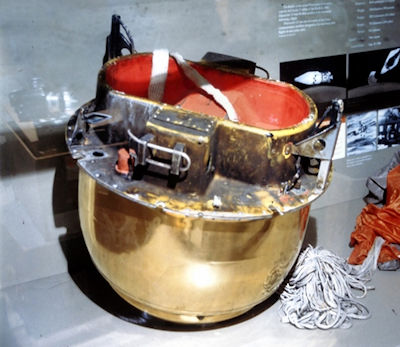 Editor’s Note: Recently we published a report on The Kecksburg UFO Incident, researched and written by Dr. Bob Wenzel Gross. Dr. Gross’ thesis is that the mystery object that fell at Kecksburg on Thursday, December 9, 1965 was in fact a top secret satellite, under the Corona Program. Well known skeptic Robert Sheaffer took issue with Dr. Gross’ hypothesis, arguing that the object was merely a meteor. Here below is Dr Gross’ rejoinder—FW

As many quality researchers understand, such predictions allow a scientist to be specific about how to demonstrate that a hypothesis is accurate. My stated hypothesis was: A Corona Satellite was launched from Vandenberg Air Force Base in California on December 9, 1965. Due to an anomaly of sorts, its recovery vehicle separated from the satellite earlier than planned. Thus, this Corona recovery vehicle in conjunction with its film bucket is a highly viable candidate for the object that landed in Kecksburg, Pennsylvania on that same date.

Once a hypothesis and a prediction are developed, a true scientist does not change them even if the results of the experiment show that they are wrong. An incorrect prediction is not a failure. It merely indicates that the experiment demonstrated new facts that were previously unknown. Experimental information by nature is imperfect. Scientific results usually contain errors. One of my research goals has always involved minimizing errors. Thanks to Mr. Sheaffer’s own recent research, I now have even more information to possibly conduct an ancillary study related to the Kecksbrug UFO mystery.

Although the Corona Satellite project was technically declassified around 1995, the contents of some satellites are currently classified—even as I write. Such contents may be classified because of the nature of the nuclear materials they enclosed. Furthermore, NASA has not yet provided a detailed description of the nuclear experiment on board Satellite KH-4A 1027 (NASA has provided detailed descriptions of nuclear experiments on board other Corona Satellites).

A NASA document that I obtained in 2017 stated that: There were no data collections returned (for United States Air Force Photo Surveillance Satellite KH-4A 1027). That NASA statement seems to contradict the statement Mr. Sheaffer recently proved in his brilliant critique whereby one of his sources indicated: The condition of the air recovered capsule was normal. Thus, I will probably investigate the capsule condition issue more. Thanks to Mr. Shaeffer, I now have some potentially valuable bits of new information to help me ferret out the true answer.