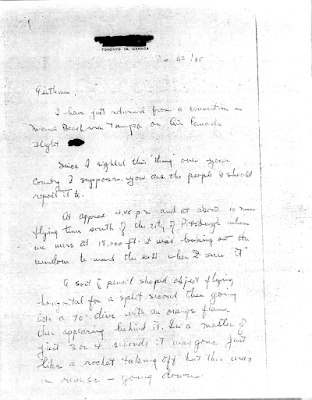 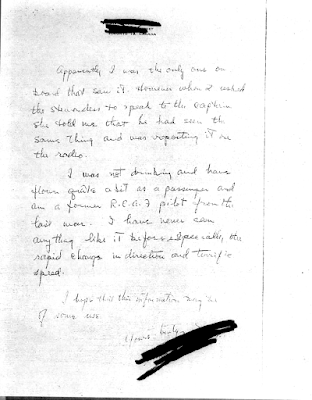 I have just returned from a convention in Miami beach, via Tampa on Air Canada Flight.

Since I just sighted this “thing” over your country I suppose you are the people I should report to.

A sort of pencil shaped object flying horizontal for a second then going into a 70° dive with an orange flame then appearing behind it. In a matter of just 3 or 4 seconds it was gone. Just like a rocket taking off but this was in reverse – going down.

Apparently I was the only one on board who saw it. However when I asked the stewardess to speak to the captain she told me that he had seen the same thing and was reporting it on the radio.

I was not drinking and have flown quite a bit as a passenger and am a former R.C.A.F. pilot from the last war. I have never seen anything like this before, especially the rapid changes in direction and terrific speed.

I hope that this information may be of some use.