In the winter of 1999, Dr. Allan Frankel, a renowned internist in Los Angeles, suffered a viral infection of the heart. Doctors told him he had six months to live. He’d rarely tried marijuana, but several of his cancer and AIDS patients urged him to use it for his heart. A year later, his heart was normal. Frankel, now 66, says he can’t be certain that cannabis healed him – but it certainly helped. “I’d been depressed and cannabis stopped the depression,” he says. “It gave me something to look forward to. My brain was turned on.” 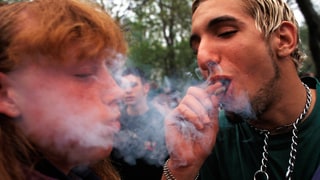 In the following years, he combed the scientific literature on cannabis, and in 2006, opened a cannabis medical practice. He developed formulas for whole plant oils with different combinations of THC, the compound in pot that gets people high, and CBD, a non-psychoactive compound that’s believed to have broad healing properties.

Working with patients, he found that many could benefit from small doses. “A quarter of my patients are taking less than 3 mg of THC a day,” he says. He calls it the “correct dose. In all medicine, with all drugs, you look for the minimum effective dose. Period.”

Welcome to marijuana 2.0. With microdosing, people are getting the maximum benefit from the minimum amount, without becoming stoned, paranoid or lethargic. Some are microdsoing to regulate their moods, boost their creativity, or enhance their workouts and yoga sessions. Susannah Grossman, 29, founder of Verdant Communications in Denver, takes several small doses through the day. “It lifts my spirits, relieves the stress and tension that build up, and allows me to approach my work with more keen interest.”

Michael Backes, author of Cannabis Pharmacy, says when prohibition ends, microdosing could be the most popular way that people use cannabis. Right now, however, anyone who wants to microdose faces two hurdles: finding the right minimum dose, and finding products that will deliver it.

The challenge with finding your dose is that it’s different for each person. With most drugs, there’s a bell curve. If you give two aspirin to 100 people, the majority will find it relieves pain, while some outliers may have negative reactions or need 8 pills to get relief. But with marijuana, there’s no majority response.

One reason for this may be found in the way that cannabinoids – THC, CBD, and other compounds found in the plant – support the natural functioning of the endocannabinoid system, which can vary from person to person. Humans and other mammals have cannabinoid receptors, which are found throughout the body in tissues, organs, and especially the brain. The body naturally makes chemicals that fit into these receptors, and together they regulate and balance the body’s systems, from digestion to nerve signaling to the immune system. Whether by coincidence or evolution, the cannabinoids found in the marijuana plant mimic the endocannabinoids made by the body.

Dustin Sulak, a physician and Reiki healer in Maine, has been practicing cannabis medicine since 2009. He says there are always forces, such as microbes and environmental toxins, pushing us away from balance, and other forces, such as the endocannabinoid system, bringing us back. “Our bodies are already working to prevent dementia, reduce inflammation, and respond to any pathological process,” Sulak says. “If we can enhance the functioning of that system with a little bit of extra THC, we can benefit.”

Sulak, 37, who wears his dark hair in a ponytail, has developed a protocol for microdosing. “I discovered that most people have a certain threshold of cannabis,” Sulak says. “Below it they’ll experience a gradual increase in health benefits, and above it they’ll start building tolerance, experiencing diminishing benefits and more side effects, like short term memory loss and clumsiness.” He adds, “I can’t tell you your perfect dose, but I can teach you how to find it for yourself.”

He describes the system. “Abstain from cannabis for two days. On day three, consume one milligram of THC and one milligram of CBD, preferably in a tincture or oil where they can be measured precisely. Before consuming, ask yourself three questions, and answer on a scale of one to 10: How easy is it to breathe, how comfortable and calm does your body feel and how easy is it for you to smile authentically, to feel content and grateful?”

After writing down your scores, he says, you take the cannabis, wait 45 minutes and ask the questions again. If there’s been no change in your scores and you’ve felt no effect, increase the dose by one milligram.

“You repeat this process over the next few days,” he says, “increasing the dose by small increments. When you reach a point where you feel a difference after consuming, you’ve found your minimal effective dose.”

At this point, he asks patients to continue raising the dose by tiny amounts. At some point, he says, there will be no further benefit from a higher dose. “You’ve established your therapeutic range, and can take the minimum dose.”

I asked how he treats heavy users who’ve developed a high tolerance. Sulak says they begin by abstaining for 48 hours. “That’s all – that’s the magic time when tolerance gets re-set.” During that time, he tells them to exercise and eat foods that support the body’s health. Then they follow the same protocol as new cannabis users, gradually increasing the dose until they feel an effect.

Sulak did a survey of 48 heavy users who’d followed the protocol, and found that afterward, they were using less than half the cannabis they’d used before and getting better results. “You’re saving money,” he says. “If you’re a smoker, you’re saving smoke exposure to your lungs, and having less side effects.”

Unlike many in the field, Sulak believes that THC is the primary health agent in marijuana. “The idea that THC is recreational and CBD is medical is far from true,” he says. “THC, milligram for milligram, has a much greater therapeutic effect than CBD. You could treat pain with 3 mg of THC, but it might take 15 to 30 mg of CBD to attain the same relief.” For overall wellbeing and to prevent disease, he recommends combining the two compounds.

But here’s the second hurdle: in most states, it’s hard to find products that tell you how many milligrams you’re getting of each cannabinoid. Carter Casad, who’s head of research and development at The Farm, a popular dispensary in Colorado, says he hasn’t “seen or heard of products that are labeled for microdosing.”

Charlotte’s Web Hemp Oil, the largest selling CBD oil in the country, doesn’t say on its labels how many milligrams of CBD are in a dropper. Ashley Grace, head of marketing, says they don’t list the amount to comply with FDA regulations. Grace says that if people call customer service at CW Hemp, “they can learn how to measure CBD content.”

You’re pretty much on your own, then, in figuring out what products will deliver your microdose. Susannah Grossman, head of Verdant Communications, used trial and error to find what will bring her to the sweet spot between no detectable effect and stoned.

When she’d been a student at Skidmore, in upstate New York, she’d smoked weed regularly, but after taking a job in Manhattan, she stepped away from it. “The workplace wasn’t an environment where you could be open about it,” she says.

After moving to a new job in Boston, she was working 75 hours a week and taking anti-depressants. She suffered a seizure caused by the anti-depressants and had to stop them. She started reading about how cannabis could help with depression, and incorporated small amounts in her daily health regime. “I had a major fear that I wouldn’t be able to write or work,” she says. “I’d slack off and produce less. But it’s been just the opposite. Microdosing has helped me focus and accomplish more.”

Grossman moved to Colorado in 2015, where she found that with recreational use being legal in the state, “You have the luxury of trying an infinite variety of strains until you find what rings your bell. You can’t do that in a non-legal state.” Wherever she went, she bought grams of new strains, tested them, and tried different combinations and doses. “It took quite a while to find what works,” she says. “I’m currently taking a tincture that’s 5 mg of both THC and CBD. Then I’ll take a puff of a certain strain three or four times a day, if I’m feeling at the end of my runway, or if I’m about to go into a meeting where I need a fresh perspective.”

I asked if she’s concerned about becoming addicted. “No, because I take breaks for several weeks,” she says. Grossman does worry about her tolerance rising, so she keeps records of her consumption, and if it starts climbing, she cuts back.

She hasn’t had a seizure since moving to Colorado, and believes CBD has helped prevent them. “But there’s something about the THC in sativa strains that I enjoy,” she says. “It lifts my spirits – gives me a sense of playfulness.” She pauses. “And I’m still getting a ton of work done!”

Marijuana is recreationally legal in eight states, from Oregon to Massachusetts – but what does that mean for visitors who want to partake?