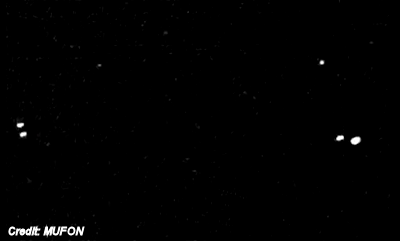 “Luckily one of my participants caught this and many of our other sightings (from all three nights no less), with his black-and-white night vision video camera,” the witness stated. “His additional footage of some of the other incredible sightings will be posted at a future date once they are compiled.”

The witness described the event.

“At just before 10 p.m. (did not note exact time), some of my participants and I saw a large, amber-colored light low to the horizon just behind Giant Rock from where my whole group of about 50-plus people were gathered and using 15 pair of night vision goggles. A contingency of about 20 of us ran to get a better view of it. To the naked eye it appeared to be a large, orangish (amber) light, that, quoting some of the 20 people; ‘flew like a bumble bee.’”

One of the guests had a good look. 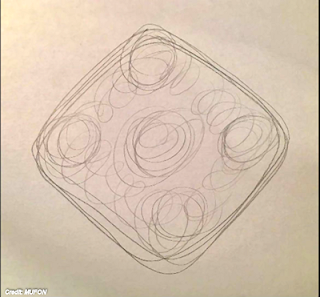 “One guest came running with a pair of the goggles in hand and got a good look at it. She said that through the goggles it looked like ‘a large diamond-shaped UFO.’ She drew a picture of it, attached here. This object then flew behind a small hill right behind the entire Sky Watch larger group. As those of us who ran off walked back to join the others, three military jets flew over in the direction of the object now gone from sight behind the hill. Some of us commented that if they were following it, meaning the jets, they were a few minutes too late.”

The group then heard the sound of a low flying jet from behind the hill.

“Suddenly clearing the top of the hill and right over our heads, came a very fast military jet chasing a faster, large, red-glowing light. The military jet had both red and white blinking strobe lights and glowing afterburners and was very loud as it flew directly above our heads. The large red light had no blinking lights and no sound at all. It became clear to all 50-plus witnesses, this was no jet. Those folks present who looked with the aid of the goggles said they were seeing either two lights, or one object with two light sources on it.”