The NSA continues to withhold the name of the assignee who composed the memo, as well as identities of additional NSA personnel referenced, but the late writer and researcher Philip Klass confidently speculated the author to be Tom Deuley. Klass was probably correct, as we will explore later in this post.

The Aug. 29, 1978, message begins by providing its recipient with some context. The author explained how he informed proper NSA personnel of his interest in UFOs and his intention to attend the 1978 MUFON Symposium. He then described events which occurred at the conference and involved researchers Leonard Stringfield, Robert Barry and Todd Zechel.

Stringfield did a presentation, during which he introduced Barry, who shared two letters he allegedly received from the CIA (Further research revealed Stringfield’s presentation was on crashed flying saucers, so we might reasonably assume Barry’s letters were related to the topic). The memo author/NSA assignee indicated he suspected the letters to be fraudulent, and proceeded to interact with the researchers in order to investigate the authenticity of the docs. He went on to explain he contacted CIA personnel who verified the letters to be frauds, and that the CIA wrote Barry and informed him that was the case.

The memo author described his suspicions of the origin of the purported CIA letters, as well as his concerns about the activities of researchers involved, including Todd Zechel (who founded Citizens Against UFO Secrecy, or CAUS): 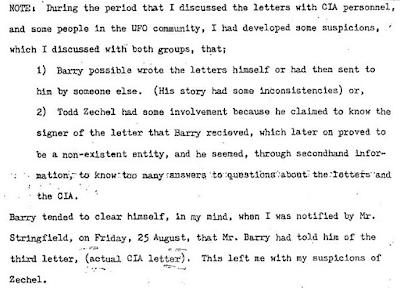 This leads us to the bulk of the body of the memo, and the purpose of its subject line, “Information request solicitation.” The memo author describes a nearly hour long telephone conversation with Zechel in which the NSA man clearly developed a sense of responsibility to inform the Agency of its contents. The author explained Zechel was requesting he “watch out for UFO related information within NSA” and “that I pass on what I could.” The NSA assignee added he had “to some degree” checked on Zechel’s character “with some people who have worked with him more closely.”

“There is some thought,” he continued, “that he would be capable of being behind the CIA letter fraud and that he is apt to go to most any length to collect information or to bend facts to fit his needs.”

The author further wrote, “I personally have some fear that now that he has made contact with me, he may, either privately, or worse, publicly attempt to make it look as if I am an inside NSA contact for him. Or, on the other hand, he may elude to having such a contact for years, then when he feels it appropriate or when cornered, hope to produce me as that contact.”

The memo concludes with mentioning “a chance of building a productive working relationship” with Zechel, whatever that’s supposed to mean, and committing, “Any further contact or requests for information will be reported.”:

The trail of the 1978 memo can be followed back to the Yeates affidavit. The sworn statements of NSA man Eugene F. Yeates were recorded in the early 1980’s when CAUS sued the NSA for its UFO files.

Yeates stated some 239 documents responsive to the FOIA request submitted by CAUS were located in NSA files. One of the docs, he noted however, should not be considered relevant to UFOs: the 1978 memo. As Yeates explained in the affidavit, “It is an account by a person assigned to NSA of his attendance at a UFO symposium and it cannot fairly be said to be a record of the kind sought by the plaintiff.”

In other words, it didn’t really have anything to do with UFOs. Yeates’ statements further suggested the NSA was reluctant to fully release the rest of its files for similar reasons: the info therein had less to do with the plaintiff’s UFO-related interests than matters of national security, particularly communications intelligence (COMINT) and signals intelligence (SIGINT).

Philip Klass explored the topic in his Jan., 1997 newsletter. Klass obtained some 156 formerly Top Secret COMINT “UFO documents” spanning the years 1958 to 1979 and previously withheld from CAUS by the NSA. While the docs were “heavily censored,” Klass concurred they primarily revealed matters of national security, such as NSA eavesdropping on Russian military sites and similar circumstances.

Klass further wrote that he strongly suspected the author of the then-withheld memo by the assignee at the UFO conference (referenced in the Yeates affidavit) to be Tom Deuley, a former NSA man and longtime MUFON board member. Klass continued that Deuley explained in a 1987 paper he was assigned to the Agency in mid-1978, just prior to attending the MUFON annual conference held that year in Dayton, Ohio. Deuley reportedly also wrote, “Before making that trip I felt it was necessary to let NSA know that I had an interest in UFOs. I took the matter up with my immediate supervisor, suggesting that the fact be put on the record.”

It can be reasonably surmised that Klass was likely correct about the identity of the memo author, as both the date, 1978, and location, Dayton, of the conference are corroborated in the now largely released document. The sponsor of the event, the Mutual UFO Network, is also corroborated, as is the description by the memo author that he was then-recently assigned to the NSA and desired to keep his employer properly informed of his activities.

In my opinion, the declassified memo represents important yet largely under reported aspects of the UFO community: the significance of espionage and counterespionage operations, investigations (unrelated to UFOs but overlapping with the UFO community) conducted by the intelligence community, and the effects the circumstances have on the genre as a whole. This appears to have particularly been the case in the 20th century, when standard methods of operation seem to have included fabricating tales of crashed flying saucers and circulating unsubstantiated reports of aliens via fraudulent documents. The dynamics are reflected in the 1978 memo, whatever may have been the actual agendas of the parties involved.

The time of the memo, 1978, was just a few short years before Richard Doty gaslighted Paul Bennewitz and shared unverified extraordinary documents with Linda Moulton Howe. The Bennewitz Affair contained entirely unsubstantiated rumors that nonetheless continue to be recycled and continuously accepted throughout UFO circles.

At that same point in time, the early 1980’s, a young airman stationed in Nevada and holding a Top Secret clearance was slipped none other than a likely forged smoking gun doc. She had a preexisting relationship with MUFON and interest in UFOs. As explored in my book, The Greys Have Been Framed: Exploitation in the UFO Community, Simone Mendez was subjected to grueling interrogations before being cleared of potential espionage charges and any wrongdoing. It is reasonable to suspect she and others may have been provided such docs for the purpose of following their trails through the UFO community, somewhat like throwing a dye pack in a sinkhole and seeing where the dye emerges.

Barry Greenwood of CAUS would later assist Mendez in obtaining documentation of her circumstances from the FBI and USAF Office of Special Investigations via the Freedom of Information Act. He also provided me with documents and information requested for inclusion in the chapter on the Mendez case contained in my book.

Also noteworthy was the 1980’s case of the late Vincente DePaula. He apparently held security clearance in his employment in the defense industry, working on satellite systems. DePaula, who had an interest in UFOs and traveled ufology social circles, was reportedly interrogated at length by the Defense Investigative Service about his ufology associates.

The activities of the intelligence community within ufology stand to substantially alter and subsequently form popularly held perspectives, and the activities often have nothing to do with unusual phenomena. The interests of intelligence agencies at least some of the time include circumstances as reported by Klass, protecting the sensitive details of such circumstances, and keeping a sharp eye on those who express unusually deep interests in them.

The UFO topic has in at least some instances been used as a vehicle to gain the trust of individuals holding security clearances in employment capacities. It is then used in attempts to extract information. It should be understood and taken into consideration that the accuracy of stories passed among such people is extremely suspect, even as they gain wider attention throughout the UFO community at large. What’s more, the intent of such architects of deception, at least some of the time, is not to mislead the public, but such manipulation is simply a byproduct of other objectives. They just don’t care what the public thinks about UFOs.

As recently as 2014 a video surfaced of the late Boyd Bushman, a man claiming to have held Top Secret and Special Access clearance while employed at Lockheed Martin. He additionally expressed he was convinced of the existence of an alien presence. He also expressed his disdain for security regulations he interpreted to restrict the sharing of research. As explored in a May, 2017 blog post, Bushman indeed held such clearance – and a declassified 1999 FBI memo revealed his employer suspected shady individuals of trying to elicit classified information from him. It is reasonably clear his interest in UFOs served as an opportunity for developing such relationships, and the resulting unsubstantiated alien-related stories were repeated without question by a segment of the community.

In the end, a valid point can be made that it is not only the IC games that contribute to the deterioration of the genre and the topic, but the very presence of individuals who partake in such games. This goes much further than a simple warning of ‘buyer beware’. The fact is the Mutual UFO Network has long been inundated with byproducts of the intelligence community, and many will recall it was Tom Deuley who served as front man for the ill fated Ambient Monitoring Project, an initiative which involved placing various data-gathering sensors and equipment in the homes of self-described alien abductees. The project was ultimately strongly criticized due to its lack of completion, lack of transparency, and general incompetence. Maybe the IC had nothing to do with the lack of adequate explanations for its failure, or the lack of resolution surrounding Skinwalker, or any number of similar circumstances, but if its members weren’t so deeply involved in such cases while simultaneously harboring classified agendas, we wouldn’t have to wonder.

Whatever the objectives may have been that were furthered by such events spanning from a 1947 press release in Roswell to the cultivation of the MJ-12 meme and all the way to the adventures of Tom Delonge – and virtually countless more cases potentially involving the IC along the way – their significance in shaping public perception should be recognized. The reasons may be as diverse as the dates and cases, but their relevance should be understood and incorporated into assessments.