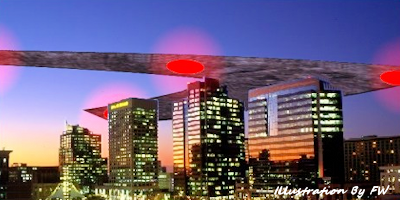 I ran down the hallway, grabbed my glasses off the bar and yelled to my wife, of 25 years, “get outside right now!” Without hesitation she followed me out the back arcadia door to the edge of our patio. (I have timed this since and it took app. 8-10 sec)

Standing at the edge of our patio, facing west, and looking north, confussion struck me. For there was no plane crash, but coming from the north and heading south was one, single structure that looked like a giant boomerang. (the description of boomerang, chevron (best), and V shaped object all apply). This object stuck out like a sore thumb in the evening sky due to the fact we were looking north towards the Phoenix metro area, and the city lights gave us a grey background in which to view this huge black V shaped object. It was so low to the surface we could not believe it. I remember saying, “what the hell is that?”

The huge V shaped craft was moving slowly to the south. At this point, still northwest of us, we both saw a 737 in landing approach pass over the object. The plane was coming in from the west heading east. The V shaped craft was heading south from the north. As the 737 passed over the V shaped object, I said, “did you see that! Why didn’t the plane get the hell out of there?” But it didn’t. The pilot nor the planes computers saw nothing. (Just like the radars at Sky Harbor and Luke AFB. Nothing was detected.)

I would like to explain more on this incident. We live app. 23 miles ESE of Sky Harbor in Phoenix. Planes coming in to land (most of the time) will come out by us, bank to the north (left), proceed for app. 10-12 miles, bank left again (west) and land at Sky Harbor. This is normal landing pattern. I have talked to airline pilots, tower operators, and investigators about the altitude of planes coming in to land at Sky Harbor, at the point of the first bank north where we live. The altitude..1200′. The massive V shaped craft we saw was under 1200′ altitude!

As the huge V shaped craft proceeded south, it was almost in front of us, when my eyes followed the left wing to it’s end. We live 1/2 mile south of Chandler Blvd. The end of the wing was well past that and at least half way to Ray Rd. (1 1/2 miles north!) I remember saying to my wife, “that son-of-a-bitch is a mile long! As it passed in front of us all we could see is the left wing. That’s how low it was. At arm’s length the object was at least 30″+ long. I reported it was app. 1 1/2 mile west of us, going down Alma School Rd. But the closest part of the huge V, the end of the left wing was much closer. Maybe within a 1/2 mile. One thing that I remember the most is how this craft “floated” app. 30-40 mph. There was no visual means of propulsion and absolutely no noise. The altitude and speed of the craft never changed.

On March 13, 1997, at app.8:31 pm mst., there was a bright bottom quarter moon setting in the western horizon. I said to the wife, “we’re gonna get more detail, look, it’s going right into the light of the moon.” But instead of greater detail of this huge V shaped craft, what we saw still amazes us. As the front of the V shaped craft entered the light of the moon, this black chevron shaped object became translucent in bright light! We could still see the bottom quarter moon thru the object, but instead of bright white, it (moon) was a dingy yellow. As the V shaped craft exited the bright moon, it became a solid black object again. We watched as the entire craft passed thru this. Seeing a solid object going into and coming out of, was black. But as the craft passed between us and the bright, white moon, it was translucent.

(Something about bright objects…witnesses who had this pass over their heads claim that as the craft passed between bright stars, it was like looking thru…water)

During the whole sighting we never moved our feet. We never considered getting a camera. We never thought of yelling for a neighbor. There was no question in our minds that what we saw was not of this Earth. Our total sighting was app. 1 minute and 45 seconds.