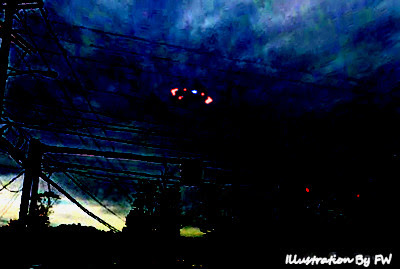 “It looked like a large donut-shaped circle that gave off flashes of light. One was white, while the other, smaller one was orange.” This was the eyewitness report provided by Vicenta Quillez, one of the residents of Reus who confirms the sighting of a UFO (unidentified flying object) flying over the Santuari de Misericordia, an event that prompted the Guardia Urbana to take a closer look at the events.

Wednesday around seven o’clock in the evening. It was around this time that she and other neighbors became aware of the presence of a large circle of lights over the sanctuary. Quilez recalls that they looked at the object for nearly two hours, unable to ascertain its nature. It was then that the UFO ceased to be motionless “and began heading toward the mountains,” she says, adding: “I’ve always had misgivings about UFOs, but I’ve never seen anything like this before.”

The sighting took place from Avenida La Salle. Uncertain as to where to go from there, the locals decided to phone the Guardia Urbana. After repeated inquiries, this newspaper has learned that the police sent two cruisers to the Santuari de Misericordia to investigate the possible UFO sighting. Police officers did not dismiss the possibility of a light-emitting object. However, all appears to indicate it was a star made visible thanks to the clear skies.”