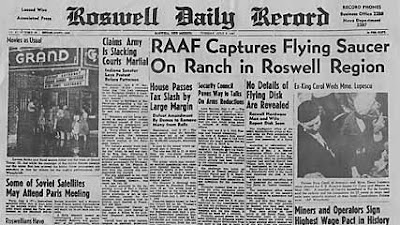 documents, diaries, journals, letters, anything that mentions the crash and recovery and written prior to 1978 when Jesse Marcel first burst onto the scene. To this point there is simply nothing of value found, certainly nothing that can be properly dated and nothing that leads us into the realm of the alien.

So, witnesses can no longer be interviewed, unless you resort to talking to the children or the grandchildren of those stationed at Roswell. This is something that I don’t think bears much fruit. Those former service members certainly could have been spinning a tale or two, the listeners could have misinterpreted what was said, or thought they heard things that weren’t said. If someone had written it down in one of those seemingly nonexistent diaries or journals at the time the tale was uttered, then we might have something interesting or something that would provide a lead, but none of that has borne fruit either.

There really isn’t a next step, except for the search for documents, and that hasn’t gone all that well. Personally, I’ve made dozens of FOIA requests and I’m not alone in that. Hundreds, if not thousands, have been made, and I’m still waiting for responses on some of them. (Or I get snide letters such as the one from the CIA… I had asked about the analysis of the Ramey Memo done in the mid-1990s by an organization that was, at that time, part of the CIA… I mentioned that the photo had been taken in 1947 and they told me that the CIA didn’t exist in 1947. I didn’t bother telling that the Central Intelligence Group did but my question dealt with the Air Force inquiry that came in the 1990s not something from 1947).

We can review the information already collected. Many, if not most, of the interviews were conducted on audio and videotape so that a record of them exists that might provide some clues. These can be reviewed. As I was doing that, I did find some interesting tidbits overlooked at the time. Oh, nothing that would alter anyone’s view, but interesting tidbits that helped complete an overall picture. And, of course, we can compare later statements with earlier ones to see if any, or rather how much, those statements have changed. Sometimes it’s just little things and other times it is a major alteration. That also can provide information but that sort of data won’t lead us to the extraterrestrial, or any other answer for that matter.

We can continue the onslaught of FOIA, but the records sought, if they even exist, would be so highly classified that national security would come into play and the records would be withheld. We would be told that the specific agency under FOIA could neither confirm nor deny the existence of the records sought. And that’s if they even bother to look for them. We just might just be told that they have no records that are responsive to our requests. I once FOIAed a document, giving the title, the date it was written, the author, and the overall topic and was told that my request hadn’t been specific enough. I’m not sure that if I have even given them the first page or two that would have been specific enough. I just don’t know what else I could have included to make it clearer to them and there seemed to be nowhere to go with the next request.

Thinking about this carefully, I just can’t seem to think of anything more to be done except another “cold case” review of the information. The testimony has been collected, the documentation has been sought, and archives have been searched. A review might suggest something to someone who has not been immersed in the case for decades, or he or she might think of an avenue of research that hasn’t been explored, but I don’t know what it would be. We are now dead in the water, waiting for inspiration.