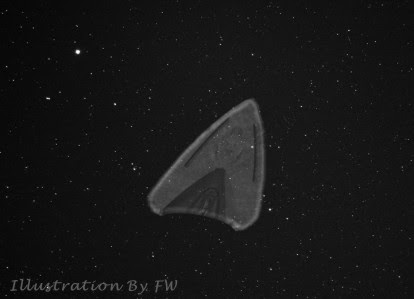 “It was very difficult to see; just triangle edges blocking out stars, and maybe not as dark as the sky behind it. It was completely silent, moving at a perfectly slow pace without a sound. I just kept moving.”

Still thinking it might be a flock of geese, the witness lit it up with a green laser.

“I was completely shocked when it bounced off the bottom of it – similar to how a laser reflects off a stop sign, but not as bright. I think I moved the laser around quickly like drawing in the sky to reveal the shape of the craft. It was a triangle – long angled front, and appeared to be a slightly curved back. I yelled for my wife to come out and look. She did, but didn’t have her glasses. I was still able to reflect the laser off the bottom and pointed it out to her as it disappeared behind the trees. I looked for several minutes just in case it would return. It did not. It moved behind the treeline.”