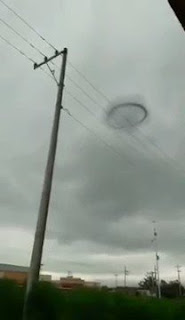 Mexico: Strange Object in the Skies Over Puebla

PUEBLA – A strange object was seen over ver Quecholac which has caused consternation among the locals, who claim it is a UFO.

A black circle appeared among the clouds, immediately attracting attention. However, an even larger shape appeared in the distance.

It was a cloudy afternoon in Quecholac, Puebla when the object was recorded. Its nature has not yet been determined.