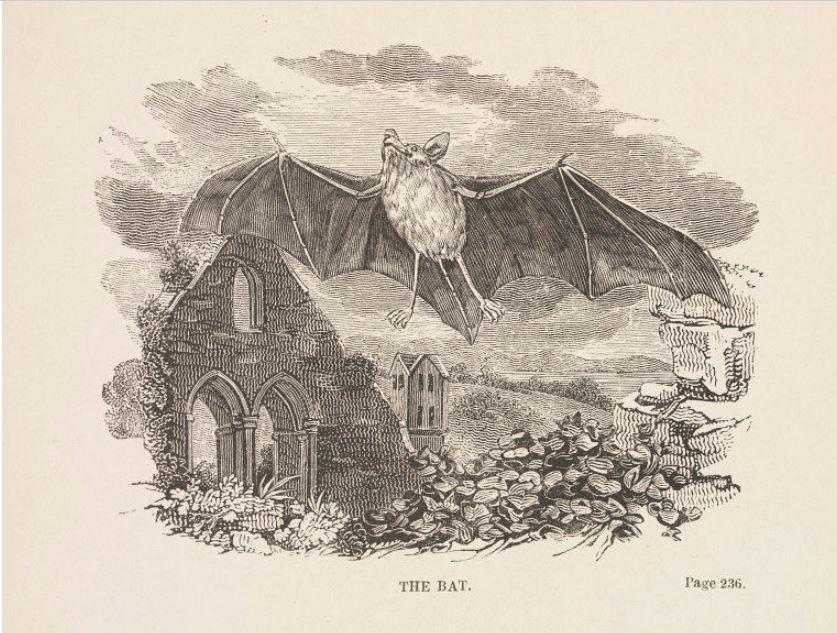 Recently there have been a spate of reports of odd Things in the sky over Chicago: Mothman 1 and Mothman 2, Owlman, a giant bat….

I’m particularly fond of bats (although I prefer them pocket-sized) so when I went looking for vintage tales of plus-sized flying foxes, I was struck by this unusual report of a spook light with chiropterid wings.

AN APPARITION THAT HAS APPEARED NEAR BURBANK

It is Seen by a Number of People—

The people of San Fernando and Burbank are considerably worked up over the antics of “spook” in that neighbourhood. It first made its appearance on the San Fernando road about two years ago and was seen by a farmer named Fisher and several others. It has appeared several times since and has frightened the life out of half a score of people.

During the hot nights of last week it made its appearance several times, and on Saturday night it cut up so many antics that more than fifty people had their attention called to it and everyone was frightened almost to death.

It rose up in the center of the road a few miles the other side of Burbank in front of a farmer who was driving home. His horses were so badly frightened that they could not be induced to move for some minutes, and then the driver found it impossible to keep them in the road.

The thing is an immense fiery ball about the size of a two-bushel basket, and has wing shaped like those of a bat. When first seen, it seemed to be struggling to get out of the earth almost under the horses’ feet, and as soon as it freed itself form the dust and hard earth, it rose gracefully and sailed around the wagon several times, coming within a few inches of the driver’s head several times. The driver felt no heat, or if he did he was so frightened that he does not remember. After inspecting the wagon and its driver to its heart’s content, it sailed off toward the railroad track, and was noticed dancing along the tops of the coaches of a passing train. It went the full length of the train and came back to the San Fernando road. When it reached a point a few feet ahead of the farmer’s team, it seemed to fold its immense wings, double itself up, and roll along the road.

It moved back and forth along the road until it became weary, when it again rose and made off for some houses nearby. It played around the roofs of the houses for some time, when it rose several hundred feet in the air and disappeared in the mountains.

The people who saw it say it is the most wonderful sight they ever looked upon. It is brighter than electricity and moves at a much slower pace than chain lightning or the fireballs that frequently rise from swamps.

As it only appears during an excessively hot night, the chances are that it is an electrical phenomenon.

The “struggling” of the light, the graceful flight, and the close approach to the driver suggest an actual animal. Yet, if this were merely something like a luminous owl of Norfolk, the driver should have had a excellent view to identify the creature.

Instead, the bat light rolls itself up, boggart-fashion, and takes a spin down the road. Displaying some of the sentient qualities reported of ball lightning, it also plays about train tracks (for which ball lightning has a special  affinity) and roof peaks, disappearing into the mountains. Could it have been an earthquake light?

With the folding of its immense wings, I desperately wanted it to be a dragon, perhaps an aerial version of the monster seen down a Mexican mine.  While there are a few stories of spook lights extruding arms or legs,  I can’t think of any other cases involving wings. Whether spook light, will-o-the-wisp, or ball lightning, they fly, like the Gentry of old, without an external apparatus.

The article indicates the bat light had been seen for a couple of years. It seems a bit odd that the locals were still so badly frightened even after several years of experiencing the fiery apparition. Eventually the novelty wears off…  I wasn’t able to find any earlier notices of the phenomenon, although there’s always the possibility I guessed wrong on the keywords.

Other news of the Burbank bat light? Or perhaps recent sightings? chriswoodyard8 AT gmail.com.

Chris Woodyard is the author of The Victorian Book of the Dead, The Ghost Wore Black, The Headless Horror, The Face in the Window, and the 7-volume Haunted Ohio series. She is also the chronicler of the adventures of that amiable murderess Mrs Daffodil in A Spot of Bother: Four Macabre Tales. The books are available in paperback and for Kindle. Indexes and fact sheets for all of these books may be found by searching hauntedohiobooks.com. Join her on FB at Haunted Ohio by Chris Woodyard or The Victorian Book of the Dead.