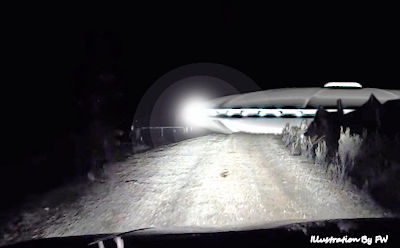 Amarillo. His story was carried in United Press International news service, UPI, and published March 2, as reprinted below:

A Wellington farmer said today that he spoke to a flying saucer last night. The man, Carroll Watts, said he was returning home from his father`s residence about a mile north of his home at about 10:30 Friday night when he saw a light from about where an abandoned house stands.

He turned off the dirt road and headed toward the light. He said he drove to within about 20 feet of an object which “appeared to be about 100 feet long and eight or ten feet high.”