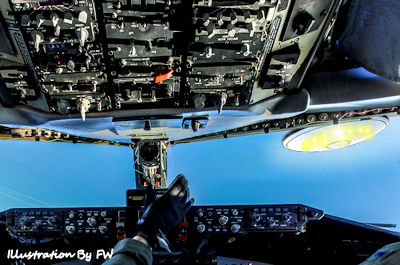 According to the files, British personnel at RAF Troodos, a remote base on the island of Cyprus listened in amazement to the radio calls of the American crew as the encounter unfolded at 35,000 feet above the sea.

The UFO – – described as covered in ‘a multitude of flashing lights 20 at a time’ – was picked up on the spylane’s radar as it approached from the south.

It then circled around the plane, call-sign Beano 73 – and closed in as the navigator appealed for help from the ground.

Two US Navy F-14 fighters were scrambled from an aircraft carrier and a RAF Phantom was diverted from a night flying exercise to intercept the UFO, south of the island of Cyprus.

As the three interceptors approached the USAF crew saw the UFO depart towards the African coast. Nothing was seen by the fighter pilots.

The files reveal how RAF personnel at the Troodos radar station monitored the entire incident for a period of 90 minutes, beginning shortly after 4pm local time.

But nothing was seen by British air defence stations – ‘nor was it seen on any ground or seaborne radar, including at 280 SU [280 Signals Unit – RAF Troodos]’.
Following the encounter a secret investigation was launched by the British authorities. The results were sent to the US Department of Defense in November 1982.
Neither the British or US government have ever released information about this incident before the files were opened this week.

Officially the US Air Force’s UFO Project, Blue Book, was closed in 1969. The British Ministry of Defence closed its own UFO desk in 2009 and its secret space intelligence unit, DI55, said it was no longer interested in ‘unidentified aerial phenomena’ (UAP) in 2000.

But the newly-released RAF file reveals that officials ordered a transcript to be made of the tape recording that captured radio transmissions made between the spyplane crew and ground controllers.

Film provided by the RAF Troodos radar station was carefully studied by photographic experts in London and large prints, taken from the radar picture, were prepared for scrutiny by intelligence officers.

The file does not reveal what happened to this evidence. The results of the joint UK/US investigation do not appear in the file.

But a tentative explanation is offered by a senior RAF official, who wrote: ‘We have a strong suspicion that the “UFO” was a mirage effect from lights on the coast of Israel or Lebanon’.

A signal reporting the sighting sent from RAF Troodos to MoD UK on 20 October describes the UFO as ‘larger than [a] RC-135’.

Boeing RC-135 aircraft are used by the USAF and RAF to support intelligence gathering. They have been used in every armed conflict including Cold War operations around the borders of the former Soviet Union. The aircraft are 136ft (41m) in length with a wingspan of 130ft (nearly 40m).

The RAF signal reporting the encounter says the ‘object’ was first spotted:

“…initially about two miles from wing of RC-135…moved position around aircraft and closed…object tailed Beano 73 for 90 mins on its northeast/southwest race track….”

The signal says the UFO was seen by the ‘whole crew’.

Three RC-135s were purchased by the RAF in 2017 to serve with 51 Squadron based at RAF Waddington in Lincolnshire. The crew includes two pilots, a navigator and up to 25 mission staff.

Elsewhere in the file a RAF Group Captain collated information on UFO reports received by his air defence staff for a thirty year period ending in 1996, in response to a Parliamentary Question from the Labour MP for Don Valley, Martin Redmond.

He asked all radar stations including the Ballistic Missile Early Warning Station at RAF Fylingdales on the North York Moors to submit UFO data to HQ No 11 Group.

His report says he could find “no reports or mention [was] found of UFOs detected by ADGE [Air Defence Ground Environment] units or 11/18 Group aircraft using radar equipment“.