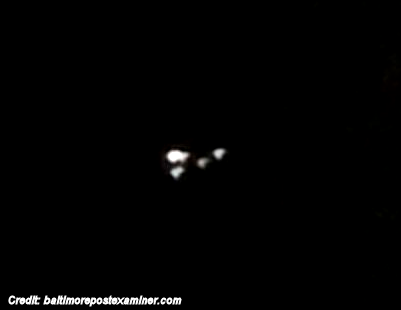 Moving west to east at a slow rate of speed was a wedge-shaped object – its triangular light configuration clearly visible from the stands. The witness (who wants to remain anonymous) first tried to use his cell phone to record the aberration. When his phone malfunctioned, he borrowed the phone of a friend who had joined him for the game that evening.

The witness later texted the picture to Donnie Brooke, a member of the Georgia Chapter of MUFON (Mutual UFO Network). MUFON is the world’s oldest and largest UFO phenomenon investigative body.