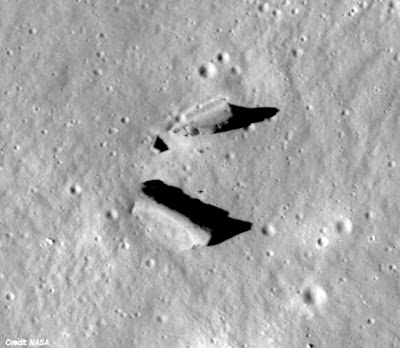 computer-generated perspective view looking northeast that the southwest end appears to be the entrance to the passageway. A reverse angle view looking southwest shows the passageway ending at a rise of terrain at the other end, possibly leading underground. The terrain surrounding the two structures is not flat but appears “excavated” by some unknown mechanism, natural or artificial. It is shown that these objects are visually different from the lunar background because their underlying structure is different.

The search for extra-terrestrial intelligence (SETI) began in the 1960s with radio-telescopes and has, to date, produced no positive evidence of its existence. During these early years of SETI, Sagan [1] spoke about the possibility of extraterrestrial visitation, “It is not out of the question that artifacts of these visits still exist, or even that some kind of base is maintained
(possibly automatically) within the solar system to provide continuity for successive expeditions. Because of weathering and the possibility of detection and interference by the inhabitants of the Earth, it would be preferable not to erect such a base on the Earth’s surface. The Moon seems one reasonable alternative. Forthcoming high resolution photographic reconnaissance of the Moon from space vehicles – particularly of the back side – might bear these possibilities in mind.”